What Is Go Team Yeah? 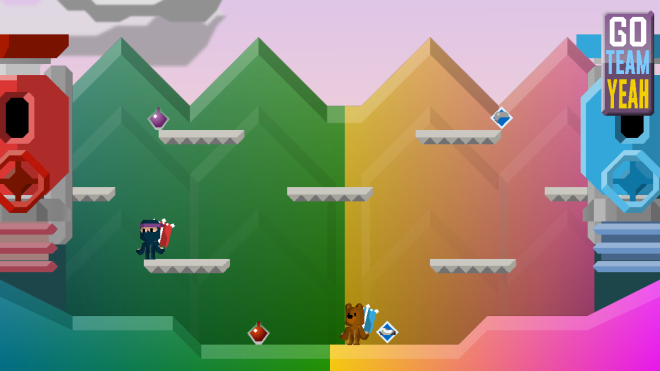 Go Team Yeah is a bit of speculation on my part. Rumours of a new Apple TV with an actual app-store have been around for years, but never seem to pan-out for whatever reason.

I personally love the idea of an open living-room console, in fact I recently bought an Amazon Fire TV Stick and use it every day. Yes, mainly as a Netflix device to replace the rubbish UI/app of my Samsung Smart TV, but more on that later.

The reason I love the idea is that last summer, my youngest son (6 at the time) came of age, and figured out how to use an Xbox 360 controller. Alright!

My elder son and I had been playing games together for a couple of years and that was great, but now the three of us constituted a party. I’d had an Xbox 360 for a few years and had dabbled with a game called Castle Crashers, single player, for a bit. Having 3 our of the 4 maximum players the game allows, I bought another controller and the three of us finished the game in a few weekends.

This was outrageous, uproarious fun. It’s a coop party game so we relied on each-other to get through it, and the youngest son while not great at combat, he was great at running around and reviving the rest of us when we went down. Which happened a lot.

Games need to include players who aren’t great at the main thing, but are great at supporting the others.

So after Castle Crashers was completed I went on the hunt for similar experiences; couldn’t find that many on the 360 so I hooked up the PC to the TV and started a Steam search. There are more there, but still not too many.

Around the same time I had the idea to hack my still unreleased game Pushdown to support more than one player. After a week I had just the basics, run around and jump on each others heads until a score threshold is broken. Even this proved fun for the boys.

September was approaching and the usual Apple TV rumours started up again. It struck me that this could be a relatively quick way to get another game out. Use the Pushdown codebase, change out the graphics, polish up the prototype code and release! Oh and hey maybe I could do an Ouya version!

Ouya had buzz back then.

Then I realised I had to release game one before I could release game two (simple math really) and went back to focusing on Pushdown.

Pushdown development dragged on (27 levels is a lot of content!) longer than I thought, and September came and went with no Apple TV announcement. I kind of sighed with relief because at least I hadn’t changed course and started working on a game with no platform. I still played the protoype every few weeks with the boys, and it remained fun.

Then in February I released Pushdown.

Getting Pushdown out the door was a big first step; after that I worked (still am working) on Therapy Quest and refined my codebase. All the boring, sticky basic stuff like UI file saving and image generation. TQ is great because it’s small, contained and proved some concepts to me, acting as a test-bed.

I also wanted to work on Go Team Yeah again, and was thinking about releasing on PC via Steam. No need to wait for Apple! But then I ran into an issue with game controllers in the middleware I use. If a controller is disconnected after the game has started, it can’t be detected again without restarting the game. This would be a bad user experience and one that I wasn’t comfortable starting the project with; just trying to mitigate a bit of risk and not invest time into something with a potential show-stopper.

Another reason to not pursue it is the controllers themselves. Xbox 360 controllers are expensive! Not many people I know – in the games industry even – own 4 controllers. So why build a game with a built-in audience limitation?

In February my sister and her family visited, so I broke out the multiplayer prototype again and added some more gameplay. Now there were “Machines”, and jumping on enemies produced energy which could be dropped into the machines to make bombs, which in turn could set fire to the enemies machines.

My boys and my two nephews played it a lot. I sat at the back of the room watching, trying to figure out the dynamics, and why they weren’t putting it down to play something more complete and polished. With good graphics.

A month later I made a special version for my sons birthday, taking photos of his friends heads in profile and mapping them to the characters they were controlling. Again I watched, enjoying the fact that it seemed pretty addictive.

And then in May I bought an Amazon Fire TV Stick and everything changed. Still looking for a multiplayer game to play with the boys, I found Bombsquad heavily featured on the store page. This is a 3D, multiplayer game where you throw bombs at your enemies (hey! Similarities!) and try to knock them off platforms. Not owning a Fire TV gamepad, I thought I’d see how it played using the standard remote.

Then I saw something that blew my mind – I could play it using a controller app on my phone. Like, what?! Download a free app, install it on my Android or iOs device and play? So I scrounged up my iPhone, iPod touch and Android phones, brought the boys over and played. We ended up shrieking, crying with laughter, it was that good. Really, just an amazing experience. Even more impressive, Bombsquad was built by one super talented guy. In his spare time. While he worked at Pixar.

So now I was thinking about wifi controllers and multiplayer code, something I had studiously avoided cos that kind of thing seems like magic to me.

If that guy can do it, I thought…

Trying to keep scope limited meant finding a simple, colourful art style that wouldn’t be a huge time-sink to maintain. I love the ‘pixels with angles’ of Ridiculous Fishing from Vlambeer so tried riffing on that, hoping to find a nice compromise between complexity and readability. This style translates to the levels as well as the characters.

For the pickups I rewrote the item code from Pushdown to allow wearable items like suits of armour and gloves. My youngest son gave me a nice surprise when he was brainstorming ideas from the back of the car, saying one pickup should be a large magnet that pulls armour off enemy players. Making the system robust enough to handle that went a long way.

Ultimately, the goal for Go Team Yeah is to make a family, multiplayer couch TV game with influences from Super Smash Brothers, Mario and games of that ilk. I’m trying to make something that could make people shriek with laughter when all the pieces work together.

Which brings us to today. The game itself is complete enough that I’ve just moved on to menus and UI screens, which means its a good time to go open with development. Which means relearning website development, content for twitter, getting back into video creation on Youtube and just a ton of other things.

If Apple do announce an updated Apple TV this month, Go Team Yeah should be ready to launch on it quite soon. After that, I’ll release on Steam, Amazon Fire TV,  and any other micro-consoles that will run it.

Either way I’ll keep updating it with more characters, powerups and levels and track the development right here.